On Thursday 11 October, there’s a by-election in the Southlands ward of Shoreham by Sea. That’s the area in the north-east Shoreham between Middle Road and Upper Shoreham Road. The successful candidate will be one of Southlands’ representatives on Adur District Council. 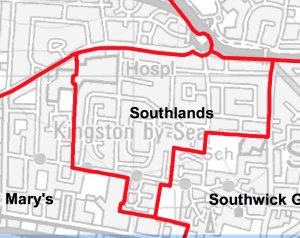 Southlands is a small area, but a busy one, with many houses and flats, and a couple of parks. People travel through Southlands on their way to multiple schools and a huge retail complex. In Southlands, many people make many journeys.

With this is mind, we’re keen to know how the by-election candidates see transport in Southlands, and in Shoreham more generally.

How do they feel about the transport choices people have, and the choices they make? What do they think of the facilities provided to enable people to make healthy, sustainable, considerate transport decisions?

Specifically, here are our questions:

We invite the three candidates to respond to these questions, and add any other thoughts they want to share. We’ll share those answers, so voters in Southlands can consider their vote this coming Thursday.

(Candidates: Tell us your responses via email, or via a comment beneath this post, or via our Facebook. We may copy your answers across between platforms, so more people see them.)

“In reply to your questions about transport in Southlands as the Green Party election candidate:
“Andrew Bradbury. Green Party.”

“Sustainable transport has been in the hands of the Conservatives for a long time and now with a stronger presence on Adur District Council, our Councillors are in a position to push for change.
So I do need to be realistic about the fact that we are still in a minority, but nonetheless there are tangible projects that we can work on straight away.
“What we are doing locally already:
“Lobbying for any element of re-investment of parking revenue to subsidise a bus service to run along popular drop off school points and I support this.
Working to lobby for developers s106 infrastructure money (harbour developments) towards a specific cycle path investment into the surrounding Southlands area where possible (ring-fenced), ensuring any potential budget restraints by WSCC can be overcome. I understand that most of the s106 money for the Southlands development went on Buckingham Park, so it is very much our turn next.
Colleagues in Worthing are already supporting a comprehensive walking and cycling strategy via the working group – feeding into the Local Cycling and Walking Infrastructure Plan.
The traffic consultation orders need to work better regarding keep children safe when they cycle/walk to school. Lots of double yellows fail to work, so we need more traffic wardens to penalise poor parking (ensuring a clearer path for walkers/cyclists to the school gates).
We are raising again the cost of employing another traffic warden to enable this.
Colleagues are sat on the Joint Scrutiny Committee looking at gaps in Worthing & Adur’s transport policy. A tangible outcome from that group has already identified areas such as Safer Routes to School and we are actively seeking to ensure that schools have new relationships with organisations who will support them to fully utilise money and grants available to them for the cycle-scheme, for which there is low take-up at the moment.
“We believe an active school led programme will encourage parents to allow their kids to cycle to school.
“What we are doing nationally: The Labour Party’s cycle manifesto is week’s away from being released, and when this comes out I shall be working hard with fellow councillors to ensure this is integrated in structure, planning, road signage, markings and campaigns to get pupils/adults out of cars and walking or cycling.
“What I would do first:
“I’m completing my Masters in Community Psychology presently and my position when I work with community special interest groups is to listen and learn from people who know their subject, and people who would be affected by any changes, and build a strategy for change together. My priority is to meet with local groups who are the expert in their subject and make sure their voices and needs are represented in the Council and shape decisions.”
“Debs Stainforth. Labour Party.”